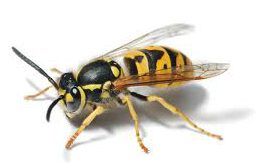 European Wasps are exotic pests that have been very prevalent in the Hamilton area over the summer and autumn. At Hamilton Vetcare we have treated a number of animals over the last few months that have been stung by European wasps. Reactions range from small, painful swellings on lips to major swelling of the face and neck and back of the throat . In some animals a rapid anaphylactic reaction will occur, resulting in shock and respiratory distress.

European wasps are black and yellow, usually slightly larger than a bee. Most of the time they will form nests up to the size of a soccer ball and occasionally even bigger.  Nests are usually located under ground, with a single entrance hole. They can also form sizeable nests in wall and roof cavities or tree hollows.

European wasps feed on meat and meat products, such as dog food, dog bones and barbecue scraps. They are attracted to rotting fruit,  sweet food and drinks.  Because wasps are attracted by their food, do not leave dog food or meat unattended in the back yard. Pick up any over-ripened or fallen fruit from the ground.

European wasp stings are not barbed like bee strings. This means a single wasp can sting repeatedly. The toxins in the sting will cause a painful reaction, and in some pets an allergic reaction. Because they are attracted to food, many wasp stings are in or around the mouth. These are the most dangerous places for a sting, as swelling can result.

Symptoms of a sting will vary depending on where the animal is bitten. Bites around the mouth will cause pain, salivation and some degree of swelling. The amount of swelling will depend on how many times your pet has been stung and how allergic your pet is to wasp toxin. If you notice severe, painful swelling around the face veterinary attention should be sought . Antihistamines that are used to control beestings and minor allergic reactions may be effective for a minor reaction to a wasp sting, but will not act fast enough in anaphylaxis or if there are multiple stings around the mouth or back of throat. Adrenaline and other life supporting measures may be required. Fatalities in animals, including horses, have been known to occur where nests have been disturbed and the animal has been bitten many times.